I wanted to play with Time Series for a role I am interviewing for, and I wanted to do it by using a lot of common constructs and building it myself. There is no way this is production ready, nor is it bulletproof in anyway. Its for fun!

You can find all the code at the github here. Some hardcoded paths exist, be forewared.

I read a bit about Time Series and knew a few things:

Data would come in with at least 4 things

Optionally can include any number of attribute key value pairs

The record would be written to the log, with minor changes.

Important code below, initializing the Actor system, creating a BoundedMailbox of a million records for sanity, and start it listening on 8000. Also

Very similar to the above except not listening to a port. Now if I wanted to use the actor in a clustering environment I could, then I would use the built in support for Redis/Consul has a hash ring provider.

Only fancy thing above is only spawn PID if needed (when the minute changes), there is a race condition here with multiple clients, that I would solve by checking for the existence of the actor first.

The actor keeps an internal count of the record it has processed, and has mentioned above flattens out the attributes into their own entries into the log.

Every 10k messages we flush to the disk, ideally I would actually move this to a background thread to not slow down the ingestion thread.

The actor on startup also registers a callback timer so that if it doesn’t get a message in 90 seconds it will flush to disk and stop itself. Since an individual actor should only be awake for 60 seconds this should work fine.

All the records get persisted to the Faster.Log as they come in.

A query comes in with several things

The query comes into the QueryGrain class where it is then sliced into minute sections between the Start and End times, then passed to individual workers (QueryMapGrain) that process each section.

Check the Key Value store for a pre-calculated value since the data is immutable, if found return early.

On my 2019 Macbook Pro, I was able to ingest around 100k records a second at peak and write them to the log until things started to tear down.

The log records generated were around 600MB for a minute slice of time, that had on average 17 million records. I generally did not run the peak 100k records during testing.

Querying the 4 minutes of data I had that was several gigs of data took around 2 minutes. Once cached it was instantaneous. 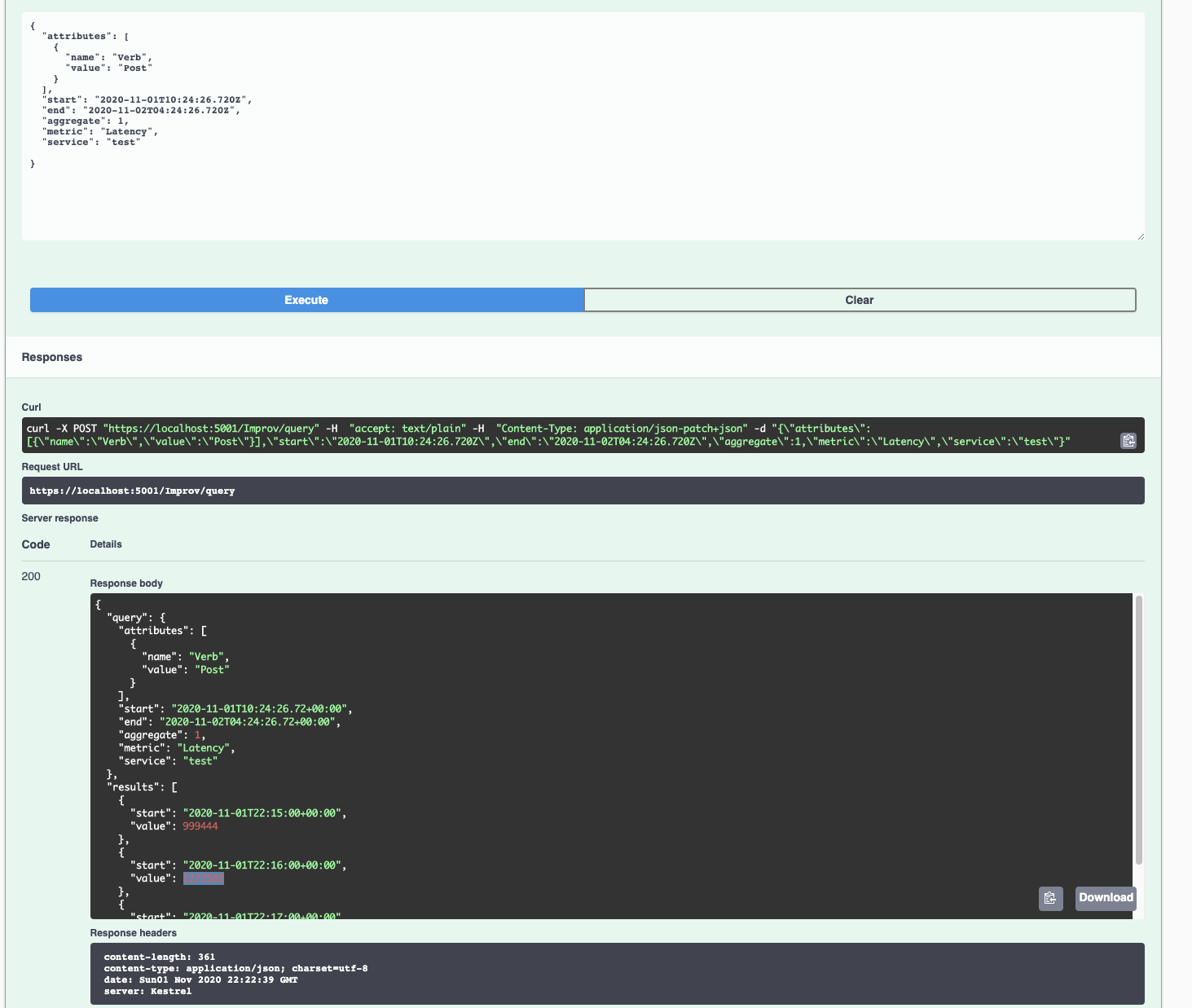 My test with one producer yielded:

What did I learn?

Had a fun time working through some of the basic concepts of how to store data and query effeciently. Once I got FasterLog working it was fantastic, though I never got FasterKV working reliably. I was thrilled with the output that the actors allowed me, learning about slicing the buckets.

Further work would be refining buckets to automatically cache common patterns. Add more query patterns aside from SUM and COUNT.

Also Faster and Proto.Actor documention is pretty rough, there is a fair amount of documentation but much of it is outdated or flat our incorrect, it is something I may spend some time correcting!

Orleans, my original actor love feels old and clunky. It has a ton of weight and the documentation is also out of date. (Though proto.actors is almost nonexistent).

Pre-calculate the cache based on usage patterns. A 100 MB file takes around 4 second to read and parse, which means a long query the cold start that covers days is harsh. Since the data is immutable the common usage patterns can be pre-calculated and stored next to the raw data. This avoids storing that expensive data in memory cache.

Cloud file system providers for the data, instead of storing it locally, move the data to S3 automatically. Faster supports the idea of tiered storage.