Note 7 One Weekend In

I recently got the chance to try out the Samsung Note 7 for an extended time period. The particular model I got is a Blue, 64 GB on AT&T. I have been an iPhone user since 2008 with the iPhone 3G, since then I have had most of series of iPhones. I think I have had the 3G, 3GS, 4, 5, 5S, 6S Plus. The 6S Plus has been my goto phone for the past year. I have actually been eying the iPhone SE simply because I prefer the form factor. I am pretty invested in the iOS ecosystem with the bulk of my music from iTunes and several hundreds dollars of purchases and apps in the app store.

That being said I am also pretty familiar with Android. My job is managing a team of people of write Android software and I did development for 5 years on the platform. I have had some time with most of the major phones during work hours but this will be my first extended use and has my primary device.

The screen and feel in hand is fantastic. Edge to edge is amazing. The Note 7 has a 5.7” screen compared to the iPhone 6s Plus 5.5” but yet the Note 7 is smaller. The seamless edges feel and look great. Speaking of feel, the iPhone has slippery sides. These sides meant I had to run the Veil case. I don’t like cases but the iPhone is extremely slick. I have not liked the new generation iPhones and much preferred the monoliths exemplified in the iPhone 5S.

Works fine, I rarely think to use it. It feels like it mostly takes up space. That being said it works great when doodling during long meetings.

Shows the time and icons for notifications. I like it!

This took nearly 2.5 hours. Moving my contacts over took more time than needed, mostly due to iCloud export only working on Firefox. I tried both Internet Explorer and Chrome with no luck. The button simply did nothing. Music was straight forward, copy files from iTunes folder to Music folder. Took roughly 45 minutes. The main problem I had was; I am a tech savvy person and it still was painful.

Notice the below screenshot. Notice the enormous amount of clutter on the toolbar. With TouchWiz I can find no way to remove much of it. In an ideal world give me signal strength, time, battery, and wifi status. 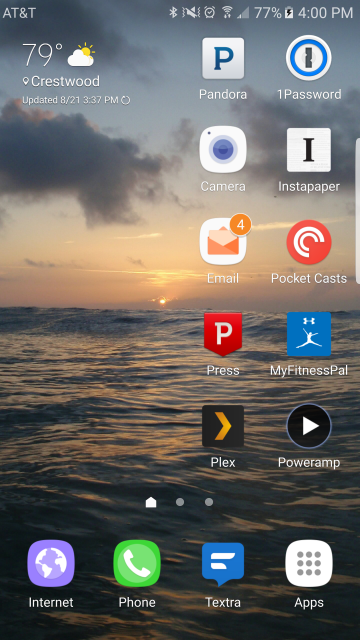 I liked the ability to add rich widgets to the home screen. For instance the below is a snapshot of my calendar. 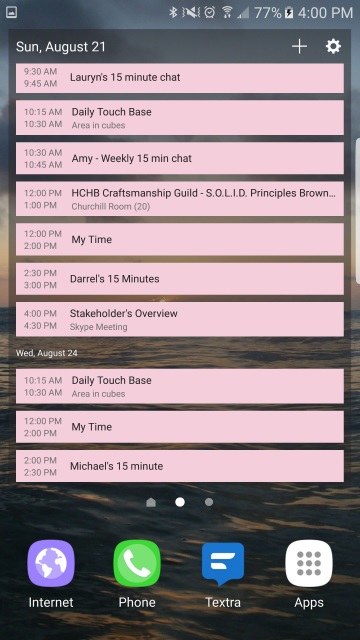 I also loved the ability to change defaults, or totally switch our my messaging application. The edge swiping to pull up common tasks, apps and people is pretty swell. Been using that feature far more than the iOS hard tap.

All the browsers I have tried I have been unhappy with. They are in no particular order

This is an area where the iPhone is leaps and bounds ahead. Same site on my iPhone 6S Plus is smooth, with any of the above it gets choppy and a ton of ads show up. I setup the Internet browser with crystal ad blocker; things improved. Still far from the smooth buttery experience I am used to.

I think that is about it. More to come later!